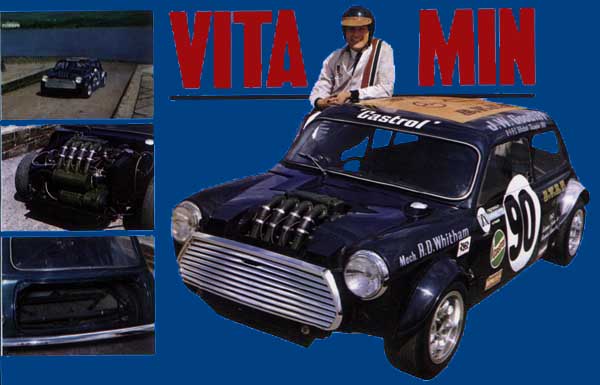 The car is a Vita-Min, a Mini - Minisprint with a BVRT 8 Port head and supercharged fuel injection. It is so quick that Jeff rarely gets out of second gear - & that's at 105 mph! This incredible little device undoubtedly the fastest Mini in the world - develops around 180 bhp @ the flywheel & weighs less than an F3 single seater. 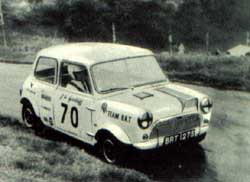 Jeff Goodliff is one of the 5 directors of British Vita racing. The others are Harry Ratcliffe (who drives the BVRT club racing 1300 'S' & was 1968's Northern saloon car champion), Jim Barnham, & two people from British Vita.

6 years ago, BRT developments was a small tuning firm in Littleborough, just outside Manchester, when the giant British Vita concern (the Vita foam Car seat people) made the decision to go into the motor industry. To gain experience in this field, they drew up a 5 year development plan with BRT (now BVRT) and put the money into racers. In the final year of the plan, 1968, BVRT took a championship hatrick with a BARC hill climb title, the Northern saloon one, and even more impressive, won division one (up to 1000cc) of the European touring car championship with John Handley driving. 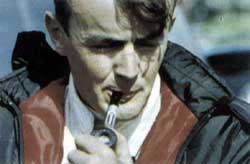 Harry Ratcliff (The engineering brains of the operation)

As a result British Vita have decided to help the racing firm further, & now have a financial interest in BVRT.

There is no international racing plan this year, but Ratcliffe is doing the occasional circuit race (he won the club saloon race at the Martini international at Silverstone in May). So the Hill climb car is the main effort this year - & BVRT intend to win the Championship again!

The chopping-down of the 1968 championship car (it was on display at the racing car show) has meant a move to the GT category, & it is running in the up to 1300cc class. Over the winter the Mini was completely gutted & the roof line lowered to within 3ft 6" of the ground. The back subframe was slung away, & a an A bracket/coil spring/ solid rear axle system as on Harry Ratcliffe's circuit car was built up for the rear.

The front section is all fibreglass & where possible alloy has been substituted for steel body panels. Petrol tank, battery and all heavy parts have been moved to the front of the car to get all of the weight over the front 12". Minilites fitted with 7" Dunlop racing tyres. Grip is even more important than handling when climbing hills says Jeff is it wasn't for front wheel drive we would be in dire trouble - the back end lifts right off the road under extreme braking! 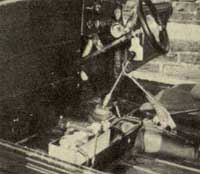 "Weight saving is also very important, as there is not much point in squeezing every last bit of power if the car isn't as light as possible, he adds. It's only 9cwt (compare that with just under 12cwt for a normal Mini) - even the brake back plates have been drilled out to save weight. 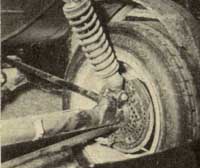 Power is no problem, however. There is a Godfrey Supercharger attached to the Tacelmit Jackson fuel injection, & the head is an 8 port X flow design designed & cast by BVRT. The same head is for sale to private customers at £350 a time (which includes the TJ fuel injection) & a number of Hill climbers are using them now.

The rest of the engine is in fairly normal race tune balanced & lightened, but not ultra-lightened - with the tremendous strain put on parts by the Blower light parts could prove unreliable. Even so, the engine will pull to 9,000rmp+ bhp is modestly reckoned at 180 @ the flywheel, and a good 120bhp of this is put down on the road through the Dunlops.

Hill climbing demands as much power on the road in the shortest possible time as does drag racing - so Jeff uses the highest possible dif. available ( 3.4 :1) & an ultra high second gear. & don't forget the 12" wheels!

"As a result I don't get out of second on the way up", Jeff points out. "I have only used 3rd on the way back down!" The car hasn't yet felt top gear!

Due to the lightness - the power to weight ratio is all important - it has been possible to retain the standard Cooper 'S' disk brakes on the front, and drums on the rear. 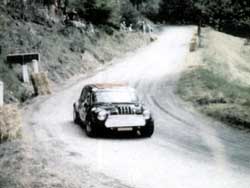 Because of the A bracket rear suspension, there are no rear seats - an alloy panel slopes from the back window to the floor. The drivers seat is tailored to Jeff's personal requirements - as I found out when I tried to sit in it & could hardly get my head into the low line car! The dashboard is a confusion of dials, instruments & switches - & somehow Jeff finds time to use them all when leaping up hills.

So reliable is the Vita Min that at the time of writing it had won each of the 6 rounds of the BARC championship it took part in - & without any mechanical troubles. This undoubtedly reflects in the tremendous preparation the Mini undergoes.

With so professional an approach, it is no wonder that BVRT & Jeff Goodliff are about to win the championship for the second year running. & its due to their originality that they won it as a saloon car last year, & will take it as a GT this year - all thanks to the added Vita Min. 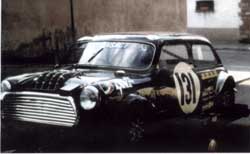