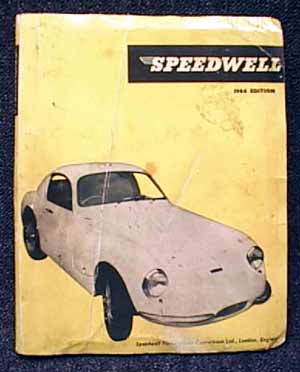 Of all the Companies in the field of 60's tuning and racing one name stands out. That name is "SPEEDWELL". From its early beginnings in north London this company went on to dominate the world of popular performance tuning and modification for most of the 60's.

In the early days they mainly specialised in the modification of British cars (particularly the Sprite & the Mini), but as the empire spread throughout the world they took on other more exotic makes such as the VW Beetle, even making it as far as the United States thanks to their tie up with EMPI (European Motor Parts Importers).

More so than any other tuner of the time, they recognised the importance of A) advertising and B) Publicity. This was no doubt helped immensely by the fact that the Company Chairman was 2 times World Formula 1 Champion Graham Hill.

They also recognised that unless they made it easy for Motor enthusiasts all over the world to buy their products they would never reach even a fraction of their potential market. In the UK & Europe they had both agents (such as Ken Lee of "Speedwell Yorkshire") and franchises, as well as a major deal with the Halfords group, but still a very large part of their business came through the "Speedwell Catalogue".

The Speedwell Catalogue was in its time unique, it clearly listed almost every item of tuning equipment sold by Speedwell along with a comprehensive and (unsurprisingly) glowing review for each of these products and services.

Packed with over 150 sides of fantastically interesting information, detailing everything from door handle conversions for your Sprite through to full blown fully built and test run Racing engines for your Cooper 'S'.

If you ever get a chance to purchase on of these unbelievably rare publications you will find it to be one of the best purchases you could ever make. I find mine absolutely invaluable.

The Speedwell catalogue was first published in 1963, and was updated in 1964. The idea was to post out regular updates detailing new products and deleting obsolete items, and although this did happen in the early days, the updates are even more difficult to come across, than the complete catalogue!

If you are ever lucky enough to find a copy of this catalogue that you think you can afford, I strongly recommend that you purchase it, as these items are very, very rare and unbelievably expensive. Their price has more than doubled in only the last year or so!

To see a copy of the Speedwell catalogue, either click on the image above for a 12Mb PDF download or click HERE for a page by page breakdown.