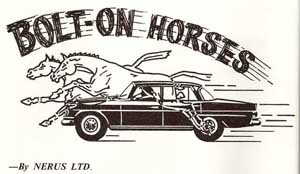 Situated on the South Coast of England in Rye, Sussex.

The Nerus Engineering Company had a devoted following of both competition drivers and road drivers who wanted a bit more out of their standard car. Nerus were brought into being as a subsidury of Rother Iron Works a company with a long history of selling into the car industry. Nerus was seen as an opportunity to take advantage of the higher profit margins offered by selling tuning equipment directly to the public.

Nerus soon developed a good reputation for equipment that worked well, although their prices were appreciably higher than some of their better known competitors.

Like so many tuning firms, Nerus seem to have dissapeared towards the end of the 1960's.

Nerus
Purveyor of “Bolt on Horses”