Another very well known name in the world of Mini Tuning is JANSPEED.

Founded by Hungarian refugee and former Downton main man Jan Odor in 1962 Janspeed went on to become one of the very best of the best.

Janspeed made their early name by offering equipment that look suspiciously like that offered by "Downton" at considerably reduced prices. Compare the two logos, even the "New" Janspeed logo was a total rip off of the by then famous Downton one.

However as Jan Odor's reputation built he went on to eclipse the achievements of Mr. Richmonds company without any of the "Works" backing that Downton always found so helpful.

One of the first cars supported by “Janspeed” was the 997 Cooper '2506 MW' this first raced at Snetterton , entered by 'Janos Speed' in March 1963. Jan's works driver for this period was F3 driver John Fenning (so no slouch!). By April '63 he almost achieved his first win which was scotched after hitting the brick chicane at Goodwood whilst fighting for the lead with John Whitmore in the works Mini. He finished 3rd.

At the end of April Fenning finished 2nd at Aintree and equalled Whitmore's best lap time (bearing in mind Whitmore was a previous champion , driving a works car). '2506 MW' was uprated to 1071cc for Crystal Palace in June, appeared at the ETCC race at Mallory Park and the British Grand Prix at Silverstone in July but was soon to be retired as the Janspeed works race car ,whilst Jan concentrated on his growing business.

Another driver who's name is synonymous with Janspeed was Keynsham garage propietor Geoff Mabbs.

Geoff came to prominence after he won the 1961 Tulip Rally in a works Triumph Herald and his exploits in his Abingdon prepared 997 and 1071 rally cars, in turn leading to some works drives and co drives with BMC.

The car was also raced under the Janspeed banner at Brands later that month and lead to a lasting relationship with the firm racing everything from a Marcos to the SCA Mini. In fact the first outing for the Marcos was in September '65 at Geoff's 'home circuit' of Castle Combe where he won the race in the wet against all manner of sports racer and lapped all but one in the process.

The Janspeed Marcos (JAN 1) was sadly short lived being later damaged beyond repair at Weston sprint.

Several other Janspeed cars were numbered in the mid 60's other than the Marcos (JAN 1), club racers Jan 2 and JAN 4, the latter of which was just about the pinnacle of 5 port tuning at the time as you can read in the December 1966 C&CC article.

The next two projects Janspeed worked on for 1967 were the SCA Mini as featured in October issue of Autoport and the Unipower GT, both completed in June 1967 and raced until the end of the season. Both cars, as most previous Janspeed works cars, were Tartan Red and Black in colour though the Unipower was raced in it's original factory white paint scheme up until it's appearance at the Spanish Grand Prix at Jarama in 1967 (where it finished a very creditable 6th) , thereafter aero developments took place at MIRA and the car was repainted red.

The SCA car, as the Unipower, proved costly and complicated  but did break the 1000cc lap record at Combe first time out and held the lap record at Silverstone for a decade! Jan Odor did have a rule about keeping cars more than six months and so once development had gone as far as it could and the cars had produced the publicity sought to promote the firm both cars were sold.By the end of the year the Unipower had been sold to Car & Car Conversions magazine and the SCA Mini to club racer Peter Hawthorne.

Once the Unipower and SCA Mini were sold Janspeed turned their attention to tuning the BMC 1800 'Landcrab' plus several other project cars in 1968 and once Richard Longman had joined Janspeed for the year before returning to Downton they had another race car on the track in the form of Richard's own club racer, prepared at Southampton Rd.

Janspeed
From Daniel Richmonds right hand to the market leader 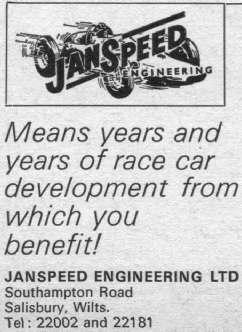 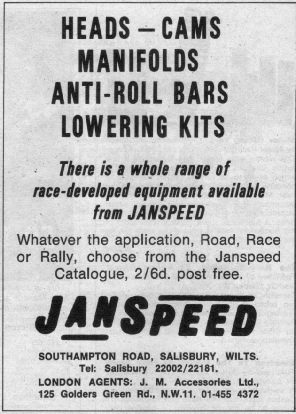 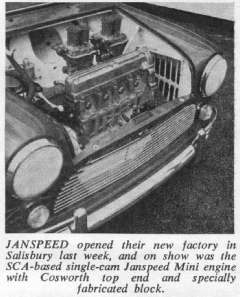