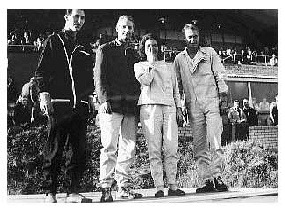 Of all the people who took to tuning the Mini in the late 1950's & early 1960's few if anyone can compete with the motor engineer from Cambridge Don Moore.

Don Moore was without doubt the best tuner of Minis in the early 1960's. Cars modified by Don were the regular mounts for drivers such as Cristabel Carlisle & John Whitmore amongst many others.

Engines modified by this unassuming man were easily on a par with, if not better than those produced by the works teams at the time.

Many people expected that Don would be made the Competition Departments "tuner of choice" but for some reason this never happened.

Don continued to run his automotive garage until his death in 2006.

Don Moore
The Competition Department’s tuner of choice.
Thank you to David Roass for supplying all the material in this section.