Formed by Bill Needham in the 1960's & based in Sheffield at the heart of industrial northern England Coldwell had a very definite engineering bias, and seemed to have little time for the boy racer brigade.

As well as manufacturing their own range of racing & tuning equipment including such items as GRP panels, inlet & exhaust manifolds, modified cylinder heads and at least one cast alloy A Series rocker cover carrying the COLDWELL name, they were also closely involved in the design and manufacture of racing cars both single seater & saloon.

Of particular interest is Bill Needham’s, Coldwell developed A series Twin cam. This impressive machine was a regular competitor in GT races during the late 1960's & early 1970's.

It is still in existence and has been seen at one or two mini events in the last few years. Another Coldwell survivor is the Coldwell Mink a F3 single seater that is currently under restoration.

I have received a large number of pictures and some more info on the Coldwell Twin cam from Nick Rogers of Min-e-bitz in Sheffield. Nick is a long time Mini fan and an excellent (& one of the few remaining) sources of early second hand & NOS Mini parts. 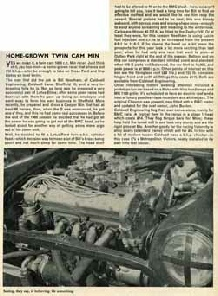 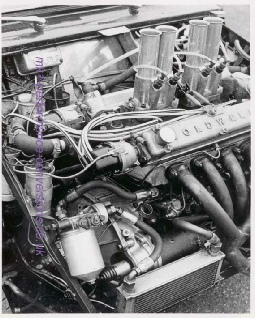