Of all the rip off's I have seen, by far the worst are related to supposed "Original Downton" items. From out and out fakes through to miss described reproduction items sold in good (ish) faith. They are all out there and if you are looking for original 1960's parts for your Cooper, S, or other 1960's BMC car you could very soon find yourself talking big money with someone who is only interested in "Lightening your load"!

I have been thinking about this section for months now. As far as I am concerned there are one or two serious problems, I want to tell you how to spot a fake, but at the same time I don't want to describe how to identify a genuine article.

Why, You may ask? Well the reason is very simple. Apart from a few notable exceptions (that I will identify) most Downton tuning equipment was produced using standard BMC parts as a basis, these were then carefully modified to give optimum performance. It is all to easy for an unscrupulous dealer to find an old modified 163 S head for example, stamp it "DOWNTON" and pass it off to some mug who doesn't know any better, you may laugh, but I have seen this done on more than one occasion and for £400.00 PLUS! The truth is DOWNTON never stamped their tuning parts "DOWNTON" NEVER, absolutely positively NEVER, NEVER, NEVER! If your Downton head is stamped Downton, I'm afraid its a fake!

So I am sure you can see my problem. The last thing I want to do is make it even easier for unscrupulous dealers to fabricate believable Downton items.

After having read this page you may still be determined to "build" yourself a "Genuine" Downton engine, using some of the tuning parts available through the enthusiastic band of "60's Annoraks" that turn up at Mini shows. Some of the items offered will be genuine beyond doubt, others will be a lot more suspect. Here's a bit of food for thought.

Occasionally "Original" Downton cylinder heads are offered for sale. These are invariably in MINT unused condition and are ready for use, needless to say the price tag attached to such a rare item can be astronomical, often in the £500 - 600 + price range. Before you purchase this head, I would suggest you ask yourself a few questions. How is it that this head has survived for the last 40 odd years in Mint condition? Why hasn't it got its original box, crate or paperwork. After all, if a cylinder head has survived in such good condition for so long it is reasonable to assume it hasn't just been lying about on a bench. If this head was so perfect when the dealer found it, why has he gone to the time and expense of having it reconditioned to an as new state, surely, if it was an original item he would get a better price for it in an unrestored restored condition when the purchaser can appreciate the beautiful patina it has developed over the years. In short , the vast majority of the heads offered for sale are simply freshly modified units that someone feels they can make more money on if they say its a Downton head. Buying a head like this (unless you are absolutely certain of the integrity of the person selling it, and the story they are telling) is as far as I am concerned a complete no, no. And remember, DOWNTON HEADS WERE NEVER STAMPED DOWNTON.

So you are probably going to get your leg lifted buying a head like this. I do however have a solution to this problem.

Remember, the people who worked at Downton producing their tuning equipment have not, unlike Downton disappeared off the face of the planet. A few of them are still working and are doing as good, if not better work today as they were 40 years ago. Don't gamble on buying a cylinder head from an unknown un-testable source, find a decent standard cylinder head and pay the likes of Richard Longman or Bryan Slark to modify it to original spec. This way you get a good head that is as close to original spec as possible, and as a bonus, it will actually work! Alternatively, get a head modified by one of the other well known & respected A Series tuners, my personal preference is Nick Swift at SWIFTUNE. So in comparison to using a manky old head of unknown origin, you will save time and money, but most of all, you will know exactly what you have bought.

The purchase of exhaust manifolds is not really an issue, as I have never seen someone with the gall to try and sell an original Downton LCB or similar. The exact same exhaust manifold is available today from Maniflow. When ordering, remember to state weather your car is a small bore, 970 1071 or 1275 the manifolds were all different!

Inlets are a little more problematical. First, most of the manifolds supplied with the Downton touring conversions were simply modified BMC items. If you find a standard BMC manifold that has some obvious and slightly unusual modifications then you may have found a Downton original, there was nothing startling about them, there was however a bit more effort put into these modifications than a lot of other suppliers were prepared to do. As usual I am afraid I can't list the modifications here, as I don't want to turn this into a "how to fake Downton parts" page. Suffice to say the modifications are sensible and almost exclusively internal. 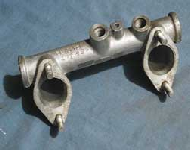 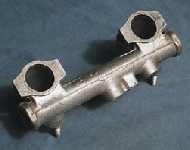 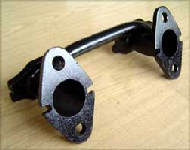 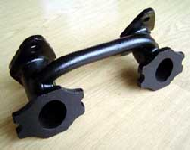 Downton did also use some tubular steel manifolds. "Original ones do come to light occasionally, but why pay a premium for an invariably rusty dubious original when for considerably less money you can get a new one fabricated at Maniflow. These steel manifolds were almost identical to the ones used / supplied to Janspeed, Richard Longman and Co. etc. and were almost all made by Maniflow. I have heard it said that ALL Downton steel manifolds were brazed together as opposed to welded, this may be the case but I am afraid I simply don't know. 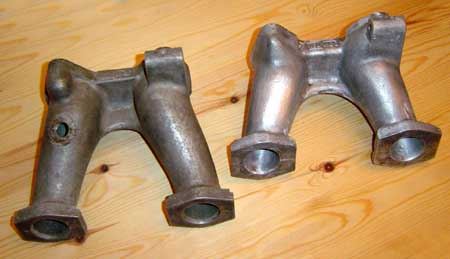 Of the rarer Downton manifolds you may find there are a number of different items for the 45 DCOE Weber, below you will find a couple of examples, a short-ish 5" example and a longer 65" one, both these manifolds are of a very similar design the only appreciable difference being the length. I have also seen a number of other variations examples of which I will be posting shortly 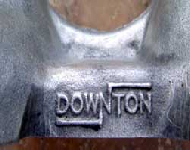 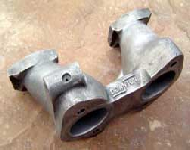 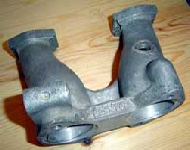 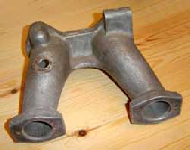 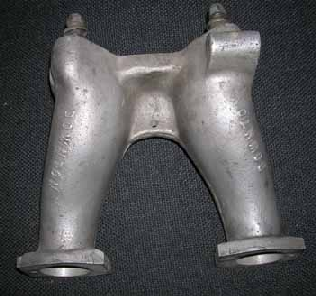 You may be lucky enough to find an original set of Downton carbs, although having said that they are not a great deal different from standard. Contrary to popular belief the vast majority of the carbs. Used by Downton were not modified in any way. As the thing with carbs. is to choose the correct one to begin with. gas flowing a standard HS2 will never make it draw as much air as an HS4, so just fit an HS4 to begin with. The modification of carburetor was popularised by the likes of Clive Trickey when an 1.5 inch SU was a rare and expensive item. If you could afford a Downton conversion then money was certainly NOT a problem. These carbs however were matched individually to their respective manifolds, making it a bad idea to swap carbs or manifolds, if this is done then the items still work well, just not as well as they should. Each set of original Downton carbs would be marked by the person who modified them or the Downton job number that the carbs were prepared for. When you have seen a few sets, you can actually recognise the person who prepared each individual carb.

Below you can see a set of genuine Downton H1's that were originally designed for the Austin Healey Sprite, but worked very well indeed on the 848 cc Mini. These were (as far as I am aware) the only Downton SU's that had their own specially cast alloy inlet manifolds. Most sets were based around the standard factory item. These carbs, when used in conjunction with a head etc. gave excellent power increases throughout the rev range, but were particularly beneficial for torque. The cars "Pulling Power" something that was seriously lacking in the standard 850. 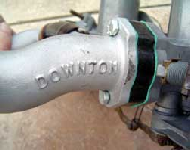 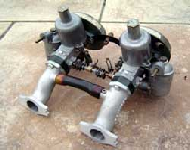 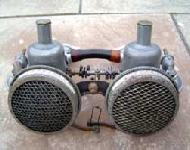 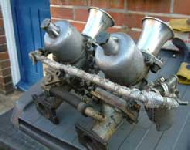 Most of the cams used in Downton engines, or at least the ones available to the general public were standard BMC profiles. However one cam that deserves an honourable mention is there "High torque cam" that was developed for use in touring engines. This cam utilised a combination of characteristics from 2 BMC cams and seemed to give (to a great extent) the best of both worlds. This cam utilised a 997 cooper exhaust profile but instead of the standard inlet it used the inlet profile from the 731. This cam gave high torque as opposed to high rev performance. It is interesting to note that a cam of a very similar profile was utilised in the MG Metro of the 1980's.

There are a variety of rocker covers that I have seen fitted to cars that claim to have a Downton heritage.

The first and most common of these is the standard "tin item. Invariably these have been fitted with a second gigantic breather fitted in the middle if the cover. These are the same diameter as the oil filler cap and have a gauze filter fitted to prevent oil leaks. These are usually finished in either BMC engine green or occasionally crackle black.

By far the most sought after rocker covers that occasionally appear on Downton tuned cars is the smooth aluminium type generally referred to as the Formula Junior. The story goes that these were rocker covers made to go on the single seater formula Junior racing cars that were the direct descendent of the Minis. I don't know how true this is, but this type of rocker cover is extremely rare and sought after. Below you will find reproduced two specific types of "FJ" Rocker cover, you can click on the image for a bigger view.

Although generally of a similar design there are a few major differences. The one on the right has a generally squarer profile, with high flat sides and a flat top, there are also cast in reinforcing sections under the bolt holes and is fitted with a standard early oil filler cap. This cover will easily take any offset rockers etc. On the left you can see a similar cover. This one has a more domed top and is a little shorter. This cover will accommodate 1.3 : 1 rockers but is too short for 1.5's.

Finally the HRG alloy rocker cover is the ONLY alloy rocker cover I have seen itemised on an old Downton bill, this I might add was a Richard Miles (Downton) London bill, not one from Downton Engineering works in Wiltshire. Described as an H.R.G. Alloy rocker box it was prices at £7 / 11s. The HRG cover was by far the most popular alloy rocker cover produced in 60's and was offered widely by a variety of different tuning companies including Alexander and Downton. It is interesting to note that this cover was manufactured by the same company as produced the Alexander cross flow heads for A & B series engines.

NO ALLOY ROCKER COVERS whatever were ever supplied by Downton & Wiltshire. Aparently "Daniel didn't believe in them". If this had been said about anyone else, I don't think I would have believed it. When said about Daniel Richmond, it sort of makes sense, don't you think.

Click on the image below for a large picture of the HRG cover.