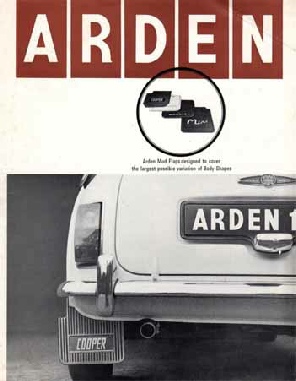 Formed in the early 1960’s Arden Continental Car Accessory Co. LTD is an accessory supplier to many of the period tuning companies.

Still running to this day, the company (part of manufacturers J. Hipwell & Son LTD) is based in Birmingham, West Midlands and are specialist metal spinners to the classic motor spares world.

During the peak trade of the 1960’s and 70’s they manufactured and supplied parts for many of the tuning companies featured on the index page as well as many other links to the Mini world.

Producing wing mirrors, for Tex/Les Leston/Alexander/B+G/Broadspeed and where the instigators of the original Bullet mirror. They also took over production of the Benelite grilles in the 1970’s and even manufactured parts for British Leyland along with many kitsch accessories available at the time.

Over the years they have also carried on several parts that where once available from Styla Accessories, Jemca (John Morgan) and Brown & Geeson, to name a few.

Examples of their wheel discs were also fitted to every BMC transporter and training vehicle.