British Vita has now acquired the remaining  50% of the shares in B.V.R.T. and the name is now AutoVita Developments Limited. AutoVita car accessories will be handled by the new company, making it a comprehensive service and accessories unit.

Pride of place on the AutoVita Developments stand at this years International Racing Car Show held at the Olimpia in January was taken by two gleaming Vita 6 Capri's and they certainly took the crowd's attention. One was the road model, offering fast luxury inter-city travel and the other a full group 11 racing job tuned to produce 280 brake horse power. The stand was completed with a display of quality AutoVita components and accessories.

Jack Brabham, three times World Motor Racing Champion, was a welcome visitor to the  AutoVita Development stand at the show. In the picture Brian Gillibrand (left) sales Director, Harry Ratcliffe, Chairman and Chief executive, explain some points of the Vita 6 Capri to their distinguished guest.

After a film show, the panel delighted the fans with their answers, to a barrage of questions. Keen interest was shown by the enthusiasts in a Mini exhibition which included a selection of AutoVita components, a Vita 6 high performance Capri, the new Ford GT 70 sports car and the 3 litre, four wheel drive Capri in which Roger Clark won last years ITV Rallycross Championship.

If on your travels in recent months you have seen a huge blue and white power boat being trailered up and down the M6 motorway between the Manchester link roads and the Lake District, then you will probably have seen the latest development of AutoVita Development.

For several months the company has been developing and testing a marinised version of the Ford 3 litre V6 engine for off shore powerboat racing, a sport still in it's infancy but one which is rapidly increasing in popularity all over the country.

What is marinising? Simply this,  to waterproof an engine so that it won't stop running if and when water gets all over it, as very often happens at sea. It all sound simple and in theory it is, in practice it takes a great deal of time and patience.

Having decided to go ahead with the Ford engine the most suitable craft had then to be chosen. Careful consideration was given to many types types but the final choice was a 21 foot Avenger glass fibre hull, designed and constructed for high speeds under all conditions.

Unlike the majority of powerboats, which have outboard engines, British Vita's boat carries it's engine within the hull. This means that the technical boys had to work out an entirely new cooling and exhaust system, complying with strict regulations concerning powerboats regarding fire risk and other minimum safety requirements.

The new boat has been named Vitapower and it's turbocharger, fuel injected engine gives a handsome 280 bhp at 5,900 rpm compared with the standard unit 140 bhp at 4,800 rpm. On numerous visits to Windermere  the Vitapower has reached speeds of 60 mph and it achieves 65 mph on salt water, there being less resistance in salt water.

Vitapower has twice been entered in competitions during recent weeks and has confirmed the promise shown in tests. On the first outing it was lying third overall and leading in class when a misfire caused it to slow. Although this was eventually traced to nothing more serious than a louse plug lead, the delay caused was sufficient to bar any chance of winning.

On her second time out in a stormy race round the Isle of Wight, rally driver Roger Clark, with Jim Bennett as navigator, were leading by over a minute when they and the boat were almost drowned by a huge wave.  Although quickly under way again they had to settle for second place.

Vitapower and the professionalism of the team responsible for her has made a tremendous impact in powerboat circles. Already the technical lads are planning what they are going to do in 1972 and talk of turbo-charging another of the Ford range of engines, but that's another story.

On the motor racing scene Grimsby driver Geoff Wood continues to dominate the up to 1300 cc class in club saloon car racing with his Vitamin. He is currently lying second overall in the major  Hepolite Glacier saloon car championship and is leading his class by a clear margin.  In rallying Jimmy Bullough and Don Barrow are contesting the Motoring News Castrol rally championship and a car has been built and prepared for Peter Clarke and Tony Mason from Skipton Yorkshire, who are entered international and national events.

AutoVita Developments have recently helped to break a seven year old record which had nothing to do with motor racing.  The record they helped to break was the Three Peaks fell running record of 12 hours 27 mins set up in 1964.  Using a Vita 6 three litre Capri, fitted with 22 gallon fuel tank, fell runner Joss Naylor from Wasdale Head, Westmorland and Frank Davies, the well known Ambleside climber, knocked 33 mins off the previous best in a time of 11 hours 54 mins.

The Three Peaks record consists of a runner putting a foot in the sea at Fort William, Scotland and being taken by car in turn to Ben Nevis, 4,406 ft in Westmorland and finally to Snowdon 3,560 ft.  At the foot of each mountain he has to run to the summit and back.  After leaving Snowdon he has to go to Caernarvon where he is timed until he sets foot in the sea.  The record breaking run involved a route of 480 miles.  The attempt was officially timed and in addition Joss had to obtain signatures from observers on each summit.  Joss Naylor is a leading fell runner and recently set a new 24 hours record when he visited 61 peaks running non stop over a distance of 96 miles.

Although racing activities in 1971 have been somewhat curtailed by our interest in powerboat development, we have been quite successful in upholding the Ford flag.  Jeff Goodliff was responsible for developing and maintaining a racing Escort in the Dutch Saloon Car Championship, resulting in an outright win for Han Akersloot who drove it in eleven hard fought races, certainly enhancing our reputation in Holand.

Han in the process of clinching the Dutch Saloon Car Championship.

Meanwhile Alan Clegg and Joe Varley, two of our other mechanics were equally successful in campaigning another Ford Escort, also Littleborough built, in the Belgian Saloon Car Championship with additional races in Germany, Holland and France.  Their driver- a girl finished with a very creditable class win in the Championship, in the process also breaking outright five world records.

In the U.K. Congratulations to Geoff Wood driving the VitaMini who won his class in the Saloon Car Championship with a total of sixteen wins throughout the season. A superb effort. 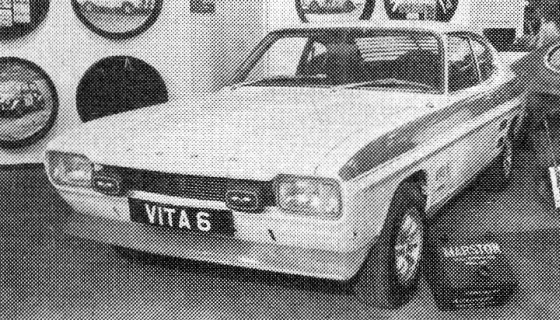 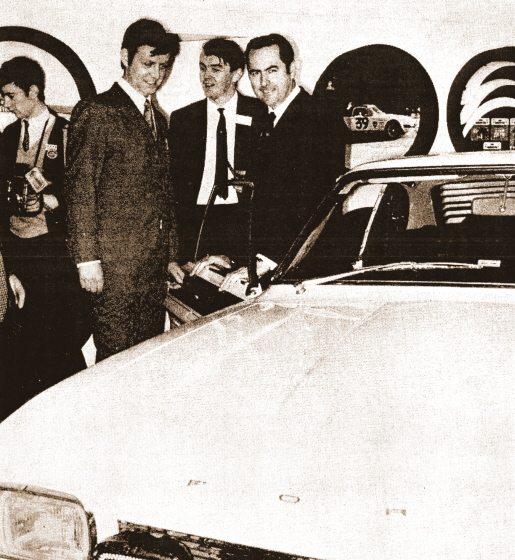 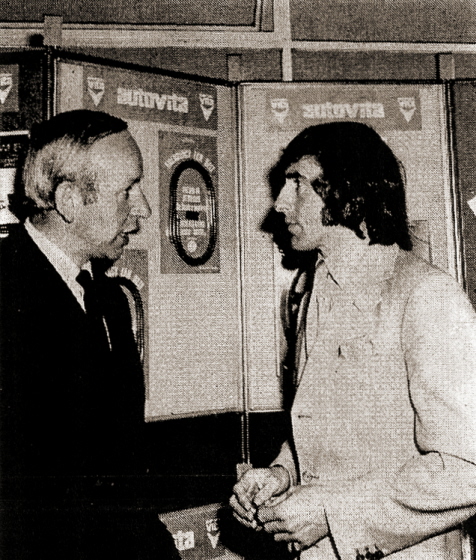 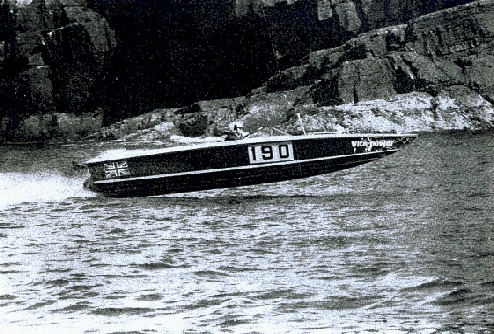 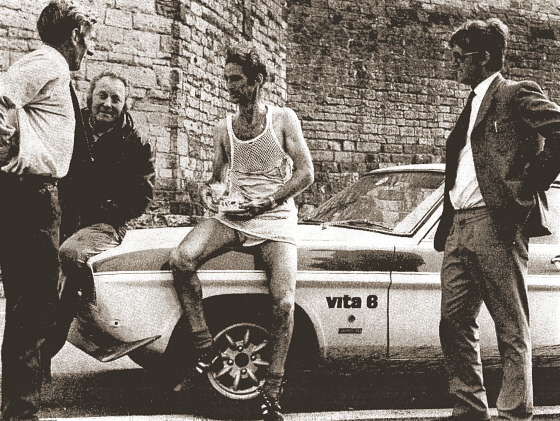 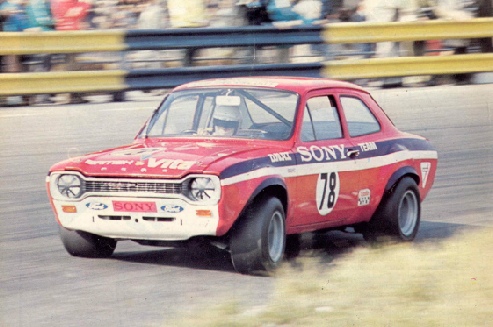 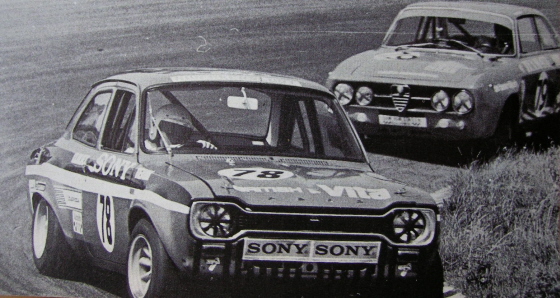 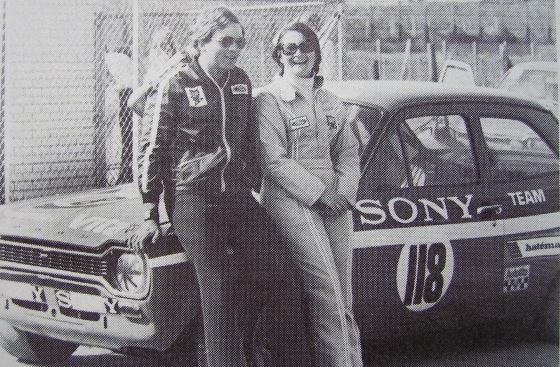