If you happen to be afflicted by a love for early Minis, you already know that there really is only one model that everyone is after, of course it's the MK1 Mini Cooper S! If, however you have ever tried to find a decent one, you know just how thin on the ground these little cars have become. If the one you are after has to have a competition history as well, then expressions such as hen's teeth or rocking horse droppings seem to naturally spring to mind! The search invariably proves too much for even the most hardened Mini nut, they either give up having looked at numerous reshell's, and piles of rusty cr4p in a couple of cardboard boxes or go totally mad, or is it sane in the process and give up looking. Well here's a story to renew your hope, genuine Mini Cooper S's are still out there waiting to be found and surprisingly, some genuinely historic cars are still waiting to be re-found. Here's the true story of one such hen's tooth. 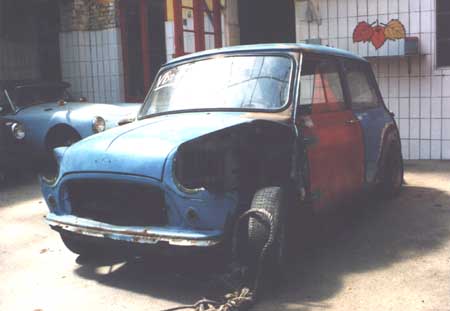 Some years ago a friend of mine, Karsten Stelk decided that the thing he needed to accompany his Austin Healey 100 was a nice genuine Mini Cooper S. He was prepared to do a bit of hunting around, but definitely wanted a genuine one and was prepared to restore it himself. Karsten heard of a decent looking "restoration project", the only snag was that it was over 1000km away. Undaunted by the distance he embarked upon what would end up as a very major project in more than one way!

When he first saw the car, the first impression was far from good, the car had no interior, no bonnet and although it was rolling, there wasn't really much more to commend it on first viewing. However, once he started prodding around, he realised this was indeed a genuine S with matching numbers and the shell was in surprisingly good condition, particularly in view of the fact that it had obviously been raced or rallied at one time or another. After giving it some thought, the deal was done and Karsten towed his new project the 1000km back to his home, for a thorough examination to begin. 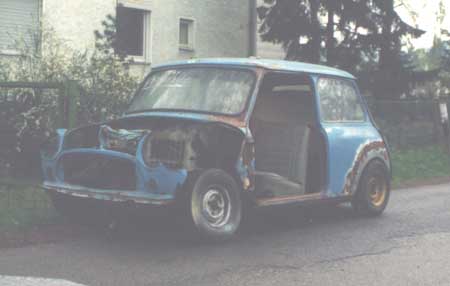 As soon as he started looking this little Cooper S looked more than a little interesting, for a start off the Alloy fuel tank in the boot was HUGE! Once it was out the original BMC parts label was revealed, complete with its rosette and Part Number 21A 1469.

This was a "Works only" Special Long-Range fuel tank that held 13 ¼ gallons. Behind this he found a large Bendix fuel pump, the bulkhead was completely sealed and the hole in the back seat was covered with a natty bit of asbestos sheet. There were other odd little touches like an unusual take off for an oil temperature sensor, welded to the filter housing

Oh and if I forgot to mention it, there was a little green, silver and black badge on the boot bearing the name "Downton".

Unfortunately, the car was first registered in Germany in 1970, leaving the years before that a total blank, therefore Karsten decide that the best place to start to try an unravel the story of this highly unusual Cooper S was to contact BMIHT. Fortunately the then archivist a certain Anders Clausager had a particular interest in Minis and was quick to confirm that this car was a personal export order for a certain "Prince Paul Metternich, via Downton Engineering Works in Wiltshire.

Before long Karsten was hot on the Trail of "the Prince"! It transpired that Prince Paul Metternich had driven a Porsche 356 in the 1952 Mille Miglia, he was a regular in the Monte-Carlo rally, Le Mans, the Targa and many other top class international events. He was one of the last German "Gentleman drivers" of the 50's and 60's. He held a variety of prestigious positions within German motorsport and crowned his career as President of the FIA between 1975 and 1985. The Prince had a very close working relationship with Daniel Richmond and Downton Engineering throughout the 1960's he even drove a Downton entered Mini (176 NWL) in the 1962 Targa Florio. The same year as Sir John Whitmore was piloting the fabled "Twinni Mini".

The first part of the mystery was solved!

Karsten's car was purchased by Prince Paul Metternich and modified by Downton Engineering for him to compete in the 51st Targa Florio in 1967, under race number 196

The conversion was however not a full blown, racing job, in the best Downton Tradition this car was to be used on the road after it had completed the race. Spending its days negotiating the twisty roads above Marbella where the Prince had a second home.

So the problems of the history of this interesting Mini were over?

No chance, this is where the work really began. Karsten decided that a car as interesting as this one had to be restored to its original Targa Florio specification, not an easy task when little or none of the original specification was actually known. 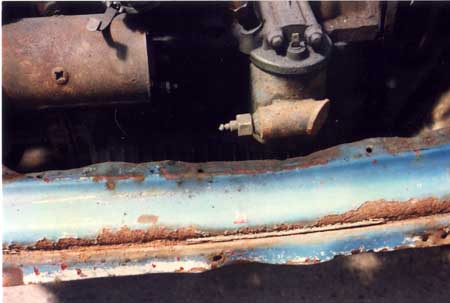 Through literally years of careful searching, in libraries, on the internet, the reputable and not so reputable experts, photo archives etc. Karsten is finally managing to piece together the specification of the car. He has managed to find a number of original pictures of his car competing on the event, click on the thumbnails for a larger view.

These were a great help regarding the outward appearance of the car, but alas, the interior remains an almost total mystery.

So here's the rub, if this genuinely historic Mini is to be as accurate a restoration as Karsten wants it to be, and in all fairness as good as it should be, he still has a few details to sort out. If you or anyone you know might possibly have any further information or Photos of this car, information on Prince Paul Metternich or photos of the 51st Targa Florio held in 1967 Karsten would dearly love to hear from you! You can contact him via the MK1-performance-conversions web site, and I will of course be following the progress of the restoration of this amazing find. As they say at the Daily Planet, "Watch this space"! 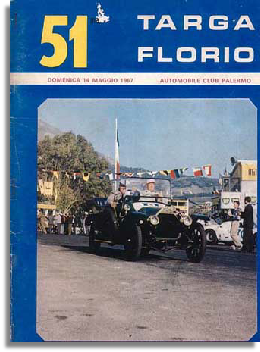