Hydrolastic Suspension
Everything you need to know.

It’s as difficult as you want to make it.

Some weeks ago Andy, James Tony and I wrote an article about refurbishing a set of radius arms for a hydrolastic   ‘69S.   As the subject of depressurising the hydrolastic system has been raised a couple of times on the forum in my short time here and we needed to depressurise our system, here’s what I have done in my mini owning time without the use of a hydro cabinet.   What follows is based on safety followed by a bit of nouse and what my mum used to call ‘….the bleedin’ obvious….’.

First thing you’ve got to remember is that the system could be pressured to approx. 300 psi so prepare for that.   Additionally what I’m going to explain isn’t evacuating the system but letting it down so that you can work on it.     IN fact, you can probably do most jobs with it depressurised to this extent.   The even better news is that because we’re going to let it depressurise in a controlled way, into a suitable container of   hydro fluid,   it’ll only draw fluid back instead of the dreaded air – which is the last thing you want in the hydro system! 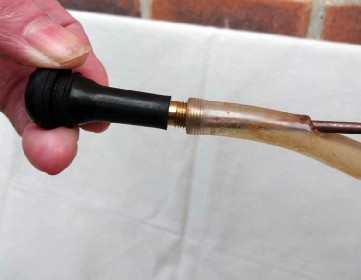 A simple depressurising gadget consisting of a piece of plastic hose with a piece of bent stiff wire.   Safe, cheap, simple and easy to make.   Will last for ever.

You should have in your mitts a 3’ or so length of plastic tube, available from any good hardware shop; I got mine on the roll from Sydenhams locally.   The internal diameter you need should be a hard push fit over the threaded Schrader valve so take an old valve in with you when you go to buy it.   Got it yet…..?   Look at the photos and cut off a small length of 1/8” steel or brass welding rod and bend to the shape shown.   At a point similar to that shown, using a sharp nail (not a knife…..) push a small hole into the plastic hose.   Wiggle the plunger through the hole as shown. 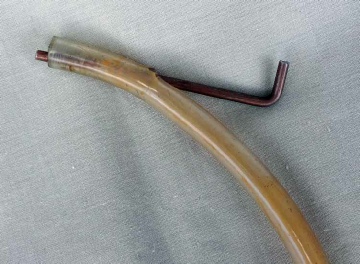 Shows the principle of the gadget.   It really is THAT simple

The pictures accompanying this article show pretty much all there is to know.   Push the hose over the hydro Schrader valve with the other end immersed through a hole in the lid of a jam jar and into a small amount of hydro fluid.   Wiggle the plunger forwards and it will self-centre onto the valve core.   Press it in……..gently does it…………, you’ll soon be able to manipulate it easily and there’ll be shwoooooosh as the fluid depressurises safely into the container. 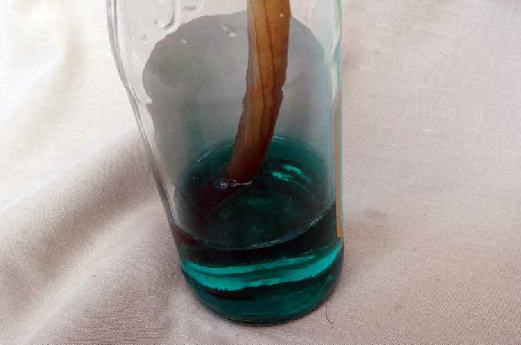 Remember that to keep the system free of air, the hose must enter the fluid so that if there is draw-back, only hydro fluid is drawn back into the system

That’s all there is to it.   No hassle, mess or dangers from high pressure liquid.   No need to remove the valve core otherwise you’ll aerate the system.     Now, here’s a little tip for you.   If you WANT to or NEED to replace the valve core, now’s the time to do it but prepare to get wet.       Remove the drain-off hose, hold the replacement core in your lips ready, core removal tool handy and ask your friend to lean downwards pulling the car down slightly on the evacuated side while you remove the old core.   While the old fluid is slowly draining down to bottom out (the system is depressurised now don’t forget) the car to its bumps remove the old core and insert the new one into the still flowing-out hydro fluid.     Done quickly and while there’s still fluid trickling out of the system, no air can have entered it.   New valve screwed in place make sure that you discard the old fluid and core

Want to know how to re-pressurise the system while not allowing any air to enter?   Read on………

If, like me you only possess one of the little ‘grease-gun’ type hydro pressurising guns, here’s a couple of little tips.   Drill a small hole near the top edge and fit into the hole a small round keyring.   Now you’ll be able to hang the thing from the garage roof from a bit of string while you’re busy pumping the hydro up knowing that when you want to let go for a while, it’s still suspended, full of fluid and ready to go again

Repressurising the system using the same gadget or the hydro cabinet?     Attach the pressure line to the Schrader valve until it’s engaged but not tight and pump the handle until hydro fluid starts to weep from the loose connection and while it’s weeping under pressure, tighten the connection up.   This has ensured that there is only hydro fluid in the line from the reservoir to the hydro system.   No air….., you’re ready to go.     Pump up until the drive shafts are horizontal 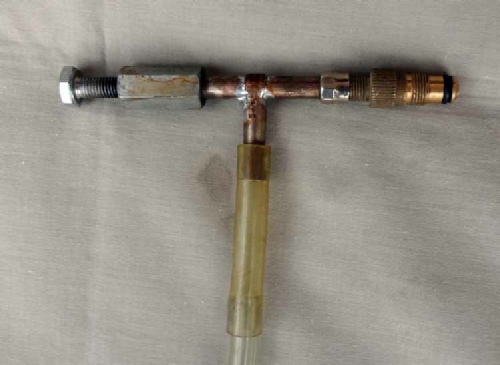 If you are a true martyr you could make an all-singing and dancing screw threaded gadget that does the same job. 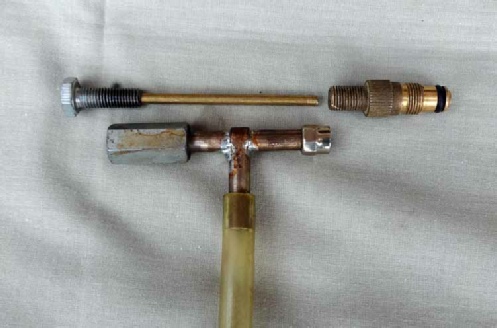 OK then, for the martyrs.   A break down of the ‘thing’ showing the screwed rod that depresses the shrader core and…… well…..   Not shown is the internal O ring within the bit that screws to the valve. 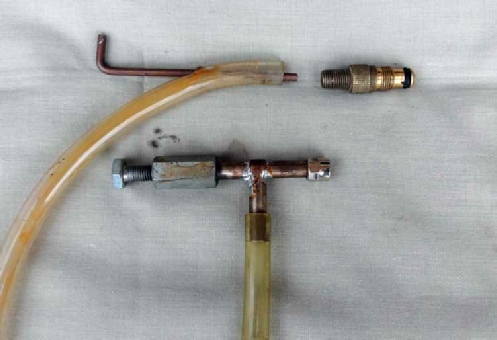 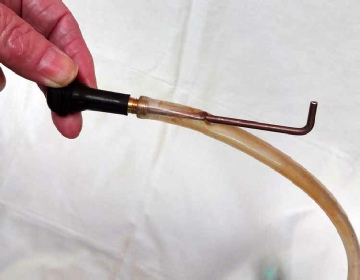 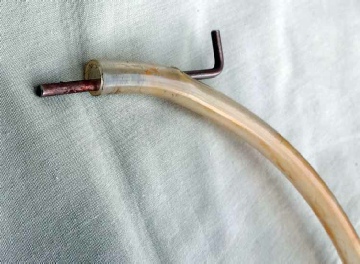