An interview with John Fitzpatrick (2012)

" When I was about 12 years old my father said to me that if I did not smoke (he was a heavy smoker) and did not ride a motor cycle, he would buy me a car for my 17th birthday. When I was 14 he started to teach me to drive his car on the sands at Borth where we occasionally spent holidays. By the time I was 17 I was reasonably competent and in fact took my driving test on my 17th birthday in my mothers Morris 1000. True to his word he bought me a car. It was not long after the Mini was first introduced and hence began my love relationship with the car.

We were living in Sutton Coldfield at time and I had left school with the intention of becoming a golf professional. Many of my friends at the golf club had their own cars and at the weekend after playing golf we would tinker with the cars, in an effort to eek out a little more speed. I bought a few parts from Kieft and fitted them myself in the garage at home. We used to meet at the Bull Inn at Shenstone, which was more or less the headquarters of the Shenstone and District Car Club. We showed a lot of interest in the MG's, Healey's and Jaguars in the Car Park and decided to join the Club. I took  part unsuccessfully in a few driving tests and sprints but the driving was gradually becoming more interesting than the golf.

One day in early 1962, I was driving into Birmingham and stopped at a garage on the Stratford Road for fuel. A rather scruffy mechanic came out to fill my car and showed an interest in the large exhaust pipe sticking out at the rear. I asked him if he would like to look under the bonnet and proudly opened it up to show off my twin carburettors and special exhaust manifold. "What a load of f*****g rubbish" he exclaimed, much to my surprise and this turned out to be the legendary Ralph Broad. I explained what I had done to the car and what I was doing with it at Shenstone and he said he would be pleased to do the job properly for me if I let him keep the car for two or three days. 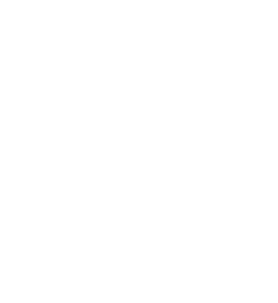 I duly went back a day or two later to drop off the car and when I collected it, it was completely transformed. Suddenly I was winning the sprints at Curborough and after finding a copy of 'Motor Racing" at a friend's house, I decided to join the BRSCC and enter a Club race at Snetterton. Ralph tuned up the car and I set off for the race together with two friends. We stripped the car of seats and any unnecessary weight at the track, stuck on some numbers and proceeded to come last in the open saloon car race. Nevertheless, I had caught the bug and we bought a trailer and an old tow car and took the Mini off the road. Ralph did a bit more work on it and we started to do well in a few club events. It was during this time that people started asking me who was tuning the car and Ralph and I came up with the name Broadspeed.

I did a full season of BRSCC Club racing in 1963. The mini was still 850cc and was stripped more than once by the scrutineers to check the capacity after beating the 1000cc cars. At the end of the '63 season I won the end of the year final race and won the BRSCC 500 Club Trophy. Sir John Whitmore was at the race and approached me after my win to tell me that he had signed for Ford and would not be driving the Works Mini Coopers in 1964 and would I like to take over his seat. He duly arranged an appointment for me with John Cooper in Surbiton from which I emerged with a contract to drive for the 'works' team. Ralph was very pleased for me, but the irony of the situation was, that during 1964, the Broadspeed car driven by John Handley was often faster than my works car. This resulted in my returning to Broadspeed for the following season which ultimately lead to me becoming a Ford driver when Ralph changed his allegiances. 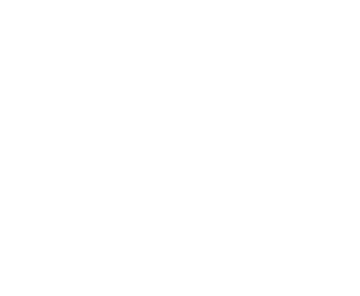 I have Ralph to thank for my career in Motor Sport. Who knows? if it had not been for my chance meeting with him, I may have taken up golf as  profession. Ralph was a whirlwind. Always full of new ideas, always finding a different way to challenge the rule book, but never breaking the rules. Full of enthusiasm and never resting until the job was done. I drove Fords for Ralph's works Team through to 1971 and then drove for him again when he ran the XJC for Jaguar. Nothing had changed". 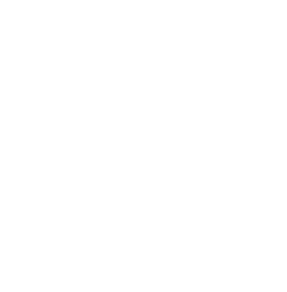 Ralph Broad was an engineer by trade who ran a small business in Sparkbrook a suburb of Birmingham. Although Broadspeed were never really interested in selling go faster goodies or for that matter working on customer cars, they are such an important team I could hardly exclude them from my list.

In 1959 he bought one of the very first BMC Minis and was soon to be seen out most weekends racing, sprinting, or hillclimbing it CON 111 soon became one of the Minis to watch! On his first time out at Silverstone in CON he won his class and broke the up to 850 lap record.

During the 1963 season the Team Broadspeed, now comprising Ralph Broad, Don Jackson, Peter Tempest, Eric Barnard, Jeff May and John Fitzpatrick ran a pair of 850cc Minis in Group 3. The drivers were Broad himself and Fitzpatrick with Jeff Mat acting as team manager. As far I am aware this was the first season that the Team Broadspeed Colours of Silver over Red (that's Ford / Aston Martin Silver Fox & Rolls Royce Regal Red) were seen, this colour scheme would become the "Official, Broadspeed livery until the teams eventual demise. Although the Broadspeed Minis were a bit down on power compared to the Cooper Car Company vehicles they were often just as "Fast", this was put down to the exceptional handling of the Broadspeed cars. On one occasion one of the cars engines was examined by the scrutineer's as it was going so well, upon investigation the car was the regulation 848cc. Meticulous attention was paid to all aspects of the cars preparation, broads "trick two supposedly being to make absolutely certain that EVERYTHING was balanced perfectly.

By 1964 the 850's had been replaced by new 1071cc Cooper S's,these were in turn quickly superseded by 1293 models. Team Broadspeed had now entered their golden era! Not only were they pushing the works Cooper team in the British Saloon Car Championship, but they could WIN as well. It was around this time that Broadspeed first began to attract a little Works support and the odd interesting engine part, from Eddie Maher at the Morris Experimental Engines plant.

In 1965 Broadspeed became the official Works backed competitor in the European Saloon Car Championships. During this season the Broadspeed cars won their class at the Monza 4 hour race, the Nurburbring 6 hour race, and a class win at Zandvoort, they also won at Spa.

During this season it was not unknown for the Braodspeed Team to take points off Coopers, maybe it was this, or maybe there was another reason, but at the end of the 1965 season Ralph Broad severed all links with BMC and ran the very successful Ford Anglias the following season, and remained a faithful Ford representative in Circuit racing for years to come. Say broadspeed to most car enthusiasts and they will automatically say Escort! But Minis brought them their first success.

Click on the image to the left to visit a collection of original images of Broadspeed cars & the people who made the company what it was.

The Broadspeed Photo Archive.
Original Broadspeed Documents.
A small collection of original sales fliers & Press Reviews, click on any image for an enlargement. 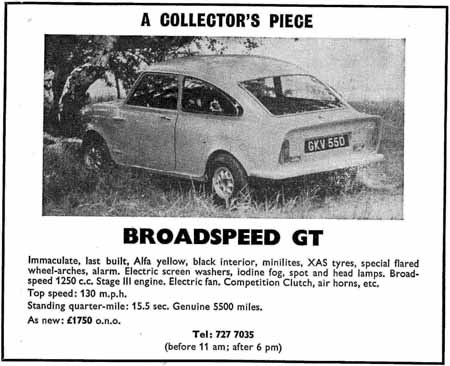 How it all ended! 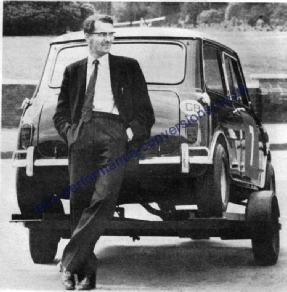 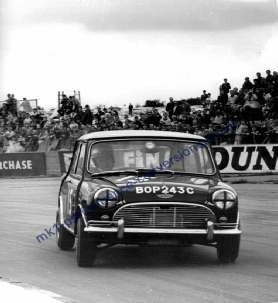 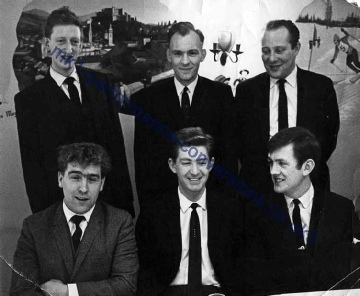 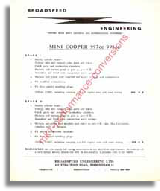 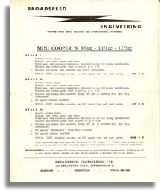 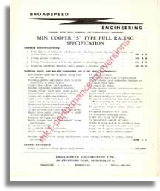 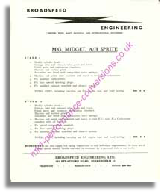 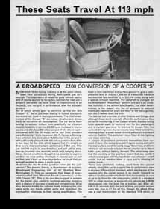 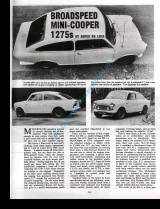 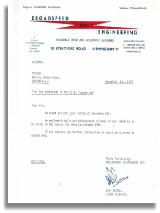 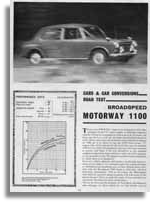